Retired Gardener can now do his own gardening 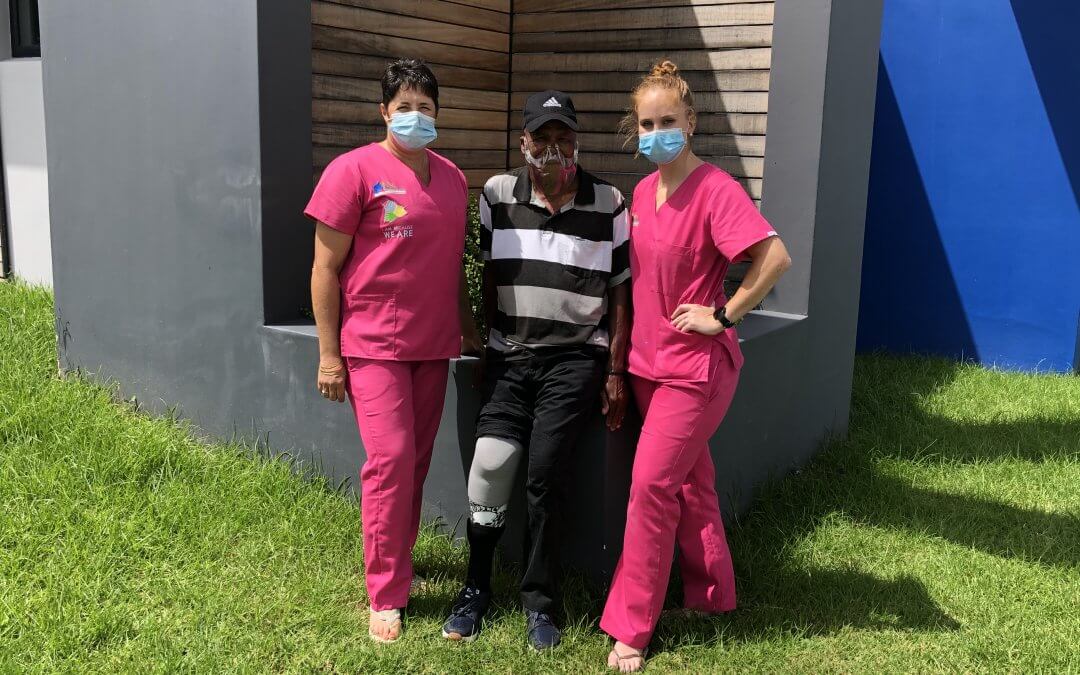 JP Veaudry; one of our Brand Champions told us about a friend of his who had tackled a DIY project of making his retired Gardener a prosthetic leg.  We were not only impressed by the initiative of Johan Lamprecht; a well know East London surfboard shaper, but we were touched by the story of Nelson Gwelani a 77 year old pensioner living in Mdantsane.

Nelson, a father of 5 worked for Johan for over 20 years before retiring.  Nelson suffered from diabetes which resulted in his right leg being amputated below his knee in 2018.  Nelson has struggled with crutches ever since, limiting his independence.  Due to his age Nelson would probably not receive a prosthetic leg through a public hospital, while on a waiting list he was allocated a wheelchair.  During one of Johan’s touch-ins with Nelson he could hear his frustration having to rely on his daughters to do everything for him.

Johan who is an avid DIY handyman did some research and took on the task of building a prosthetic leg for Nelson.  Unfortunately, in his first attempt the leg was not successful as it was extremely uncomfortable.  So, Johan decided to chat to fellow surfer, JP about his prosthetic leg.  JP was impressed with Johan’s creativity, but also understood the limitations so mentioned the attempt to Marissa Nel who manufactures and repairs his own prosthetic legs.

In line with Marissa Nel & Associates commitment to improving the lives of people living with disability, offered to manufacture, and fit a prosthetic leg for Nelson after he was assessed for his physical ability and muscle strength to handle the new prosthetic limb.

Nelson who is currently receiving training on how to effectively use his new leg from the team at Marissa Nel & Associates is delighted at his newfound mobility.  Nelson said: “I did not expect Johan to organise something like this for me, such a nice surprise from such a good boss.  I have never seen people so kind and helpful like the team at Marissa Nel”.

Nelson is looking forward to doing his own gardening and run his own errands.