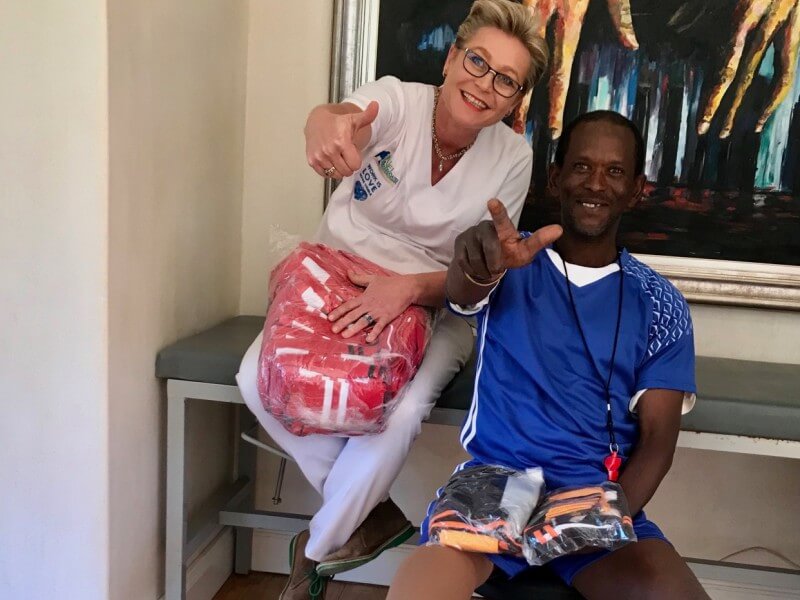 During our visit and assessing William’s needs, he shared his touching story with us. He was a fit, healthy, and strong male employed at the Kloof Gold Mine. He used to play soccer and was well known at Carletonville for his soccer skills. He was tragically injured on the 23rd April 1997 which resulted in his leg being amputated above the knee.

William took on the responsibility of looking after young boys in his area by encouraging them to stay away from bad things affecting the youth by keeping them busy by coaching them to play soccer. Some of the children he coaches used to take drugs and commit criminal offences such as house-break-ins, but he managed to positively influence them to let go of all old bad habits to join his soccer team.

It has been a challenging process, as there has been no financial support for the initiative. William queried if Marissa Nel & Associates had the ability to assist his project. We were touched by his passion and commitment to the children in his soccer team. William wants to create a sense of belonging for the youth, and to use sport to teach many life lessons such as winning and losing and being part of a team to whom you always have to give of your best.

We were so impressed with William and his goal of changing these children’s lives, so we committed to sponsoring his soccer squad made up of two teams with full kit. The kit allowed the children to be recognised as a team which bolstered the team spirit and dedication.

Last week we manufactured and fitted William with an Above Knee prosthesis and he had this to say:
“I need to let people in my community know how helpful you are to people with disabilities, we have people who have been injured in car accidents and don’t know there are people like you who can assist with artificial limbs”

We continue to be committed to sustainably changing people’s lives.