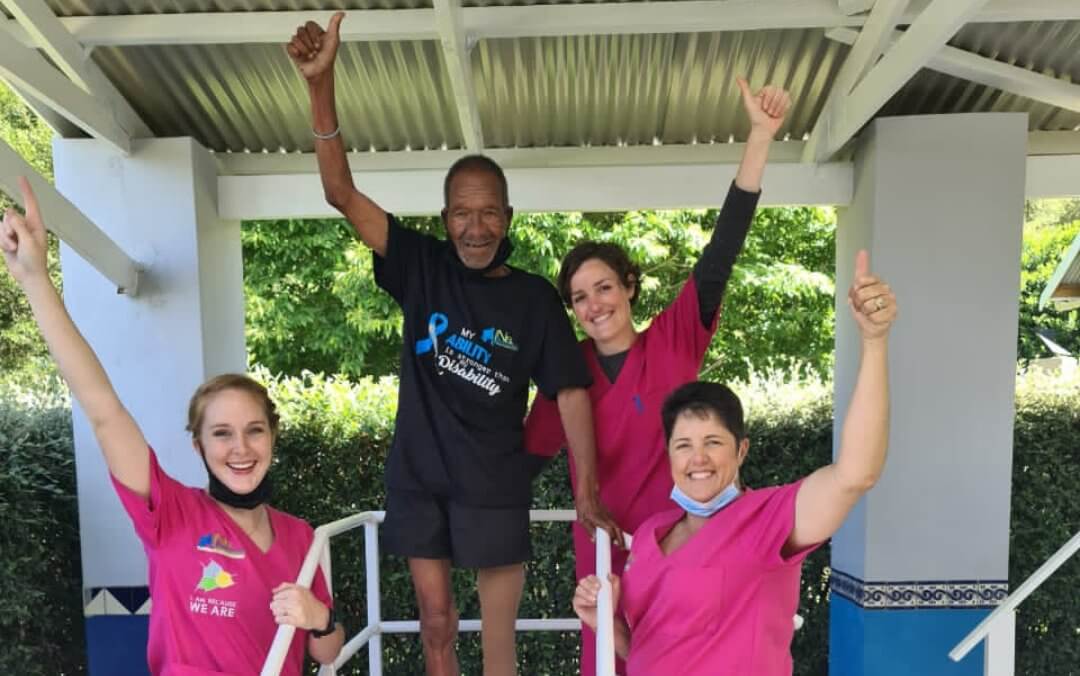 The International Day of Disabled Persons was proclaimed in 1992 by the United Nations General Assembly and aims to promote an understanding of disability issues and mobilise support for the dignity, rights and well-being of persons with disabilities. It also seeks to increase awareness of gains to be derived from the integration of persons with disabilities in every aspect of life.

This is the inspirational story of Danile Ndobo, 94 years old.

Danile was born in the Transkei in 1926, without formal schooling, working on the farms. As a young adult he relocated to Gauteng working in the mines for some time before returning to the Border Kei region where he continued with farm life.

Although Danile retired in 2014, he continued with casual gardening jobs and it was during one of his evening walks home, being dark in the rural areas, that he fell into a manhole and badly twisted his leg. He managed to get himself home but was not able to walk the distance to the clinic nor had a phone to call for help, so he dealt with the pain in the hopes that his leg would heal on its own.

When he started noticing sores and rot over his leg, he became worried and some community members rushed him to Cecilia Makiwane hospital. The doctor informed him his leg, which was broken, was full of gangrene and would have to be amputated to avoid the infection spreading and potentially being fatal. Naturally Danile was afraid to lose his leg but did not want to also lose his life.

His leg was amputated above the knee and, after being provided with a wheelchair, Danile returned home. The sad reality of this meant Danile had to live off a pension grant, unable to work and try to manipulate a wheelchair that was not well suited to the rural setting of where he lived, making everyday tasks, like getting into his home and using the public toilet, challenging. For a time, Danile resorted to moving around on the ground by pulling himself using his arms or by means of donated crutches, which caused pain to his shoulders and arms. He also became fully reliant on relatives to collect his pension and buy his food and once a month Danile used his crutches to walk to the clinic to get his medication which took him an hour each way.

Despite having applied for a prosthetic leg from the Government hospital, he had struggled to get feedback only to eventually be informed, after waiting 5 years, that his request had been declined due to his age. Danile gave up hope of ever getting a prosthetic leg.

While in the care of his younger brother, Danile’s niece, Xoliswa, came to visit the family and was saddened to see his poor quality of life. She came across Facebook posts by Marissa Nel & Associates regarding prosthetics so Xoliswa decided to take a chance and reach out with Danile’s story. Marissa, touched by the sad story, met and assessed Danile’s leg, deciding that something had to be done to change the course of this man’s life and that age should not be a factor.

Marissa arranged for the prosthetic leg to be donated, and she happily sponsored the manufacture of the socket and fitting. “I never thought it would be possible to get a leg, it’s a dream come true as now I will be able to do things on my own like clean my house and do my shopping. It’s going to change my life” said Danile, after being told he would finally receive a leg.

Marissa believes there are great lessons to be learnt from this situation, but importantly that we can’t deny people the opportunity to live without limitations due to age. “It’s important to me that Danile knows his life matters, regardless of his age or disability” she said.

Danile’s leg will be fitted on the 1st December and he will be receiving support to assist him to learn how to walk, move and use his leg.

The theme for IDPD 2020 is “Building Back Better: toward a disability-inclusive, accessible and sustainable post COVID-19 World”. Disability Awareness Month offers us all the opportunity to remove barriers and attempt to improve the quality of life of the disabled community through concrete action.