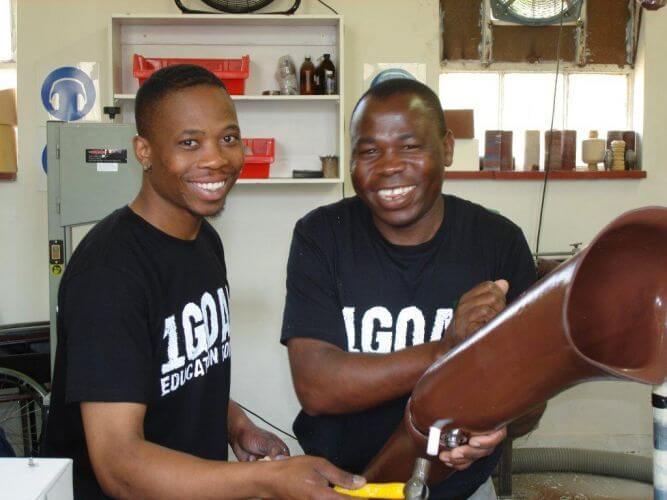 Nkosinathi Mbabane from Zithulele village in Mqanduli lost his leg doing what he loved 13 years ago, and only this month can he walk again with a prosthetic leg.

Mbabane, 41, remembers his soccer team Zithulele Cosmos playing against another village team Mdikene Celtics on Reconciliation Day in 2003. He was playing striker.

“I was kicked on my right leg as I was going to score and I broke my leg. My team won despite the fact that I was in hospital by the time the match ended,” he recalled.

He said he was taken to Zithulele Hospital and a few days later he went to Bedford Orthopaedic Hospital in Mthatha where his leg was amputated.

“What they found was that a bone had burst one of my veins and the vein was no longer functional,” he explained.

Over the years Mbabane had to depend on crutches. The unemployed father said it had not been easy as he usually walked children to soccer practice and herded cattle.

“I really miss playing. If it were possible, I’d love to go back, but I doubt this can happen,” Mbabane said.

At the beginning of the month, Mbabane and 14 others were fitted with prosthetic limbs through the help of community-based organisation, Rural Ability.

Nobuntu Mosini said her nine-year-old son, Simamkele, had been playing outside with his slightly older brother in 2011 when he lost his leg.

“They took their uncle’s gun and his older brother shot him by mistake.

“We rushed him to Zithulele and the doctors said the bone had splintered too badly and they couldn’t set it.

“We were referred to Nelson Mandela Academic Hospital in Mthatha where his left leg was amputated.”

She said following that she started to look for physiotherapy options accessible to them. Simamkele used crutches and Mosini tried to find a replacement limb for her child.

She was grateful that Simamkele had been granted a prosthetic limb this month through the same programme as Mbabane.

“At least now he can do the things he couldn’t do and he loves to play. This gives him some independence,” she said.

The organisation had lobbied for years for government to provide prosthetic limbs for more than 90 amputees in the area, with little to no success.

Morgan said the lack of qualified personnel to make limbs exacerbated the problem and the only orthopaedic hospital in the province was inundated.

The organisation managed to convince Swedish prosthetics company Ossur to sponsor some of the prosthetic parts they needed, such as knees. Marissa Nel and Associates assisted with funding and manufacturing of the limbs.

In the eight years Morgan had worked in the community, this was the first breakthrough they had experienced for those with disabilities. However she lamented the lack of physiotherapists and feared it would make the journey difficult for those who had received limbs to learn proper use and care of them.